CBL is one of the main independent suppliers of drama and comedy for BBC Radio 4 and for drama on Radio 3 and has won five Sony Radio Academy Awards. 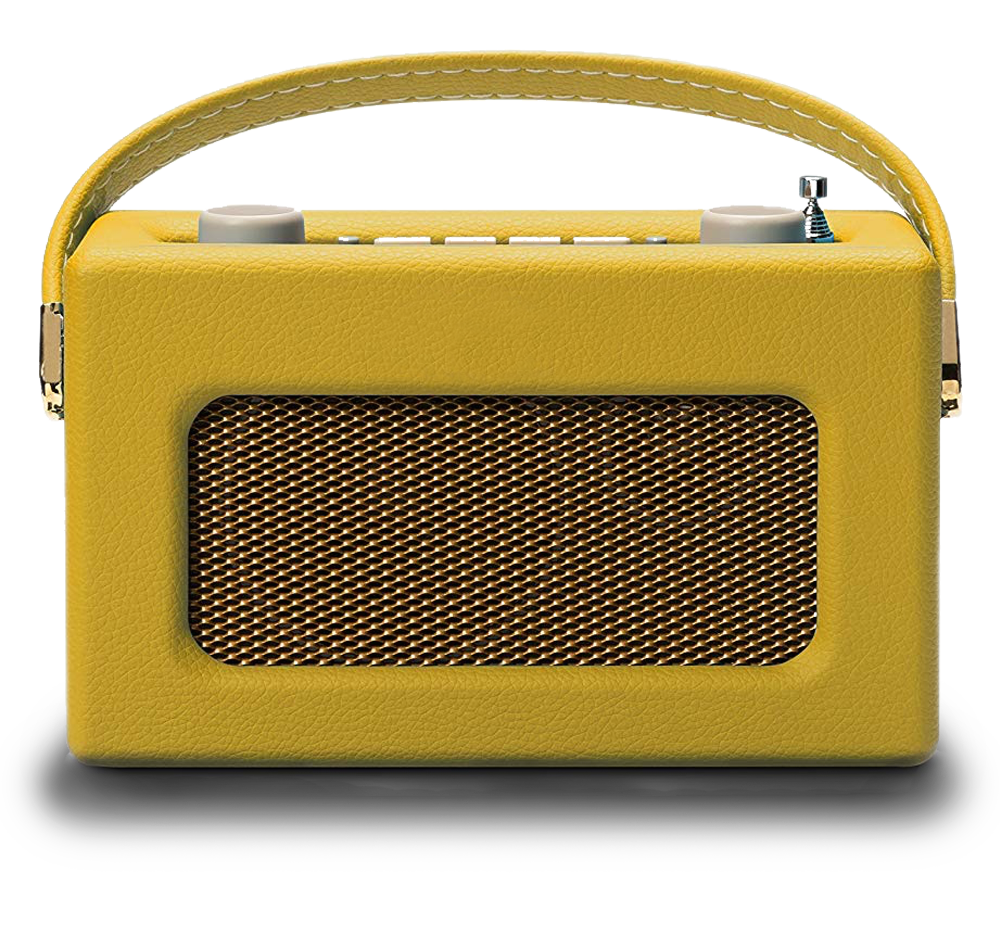 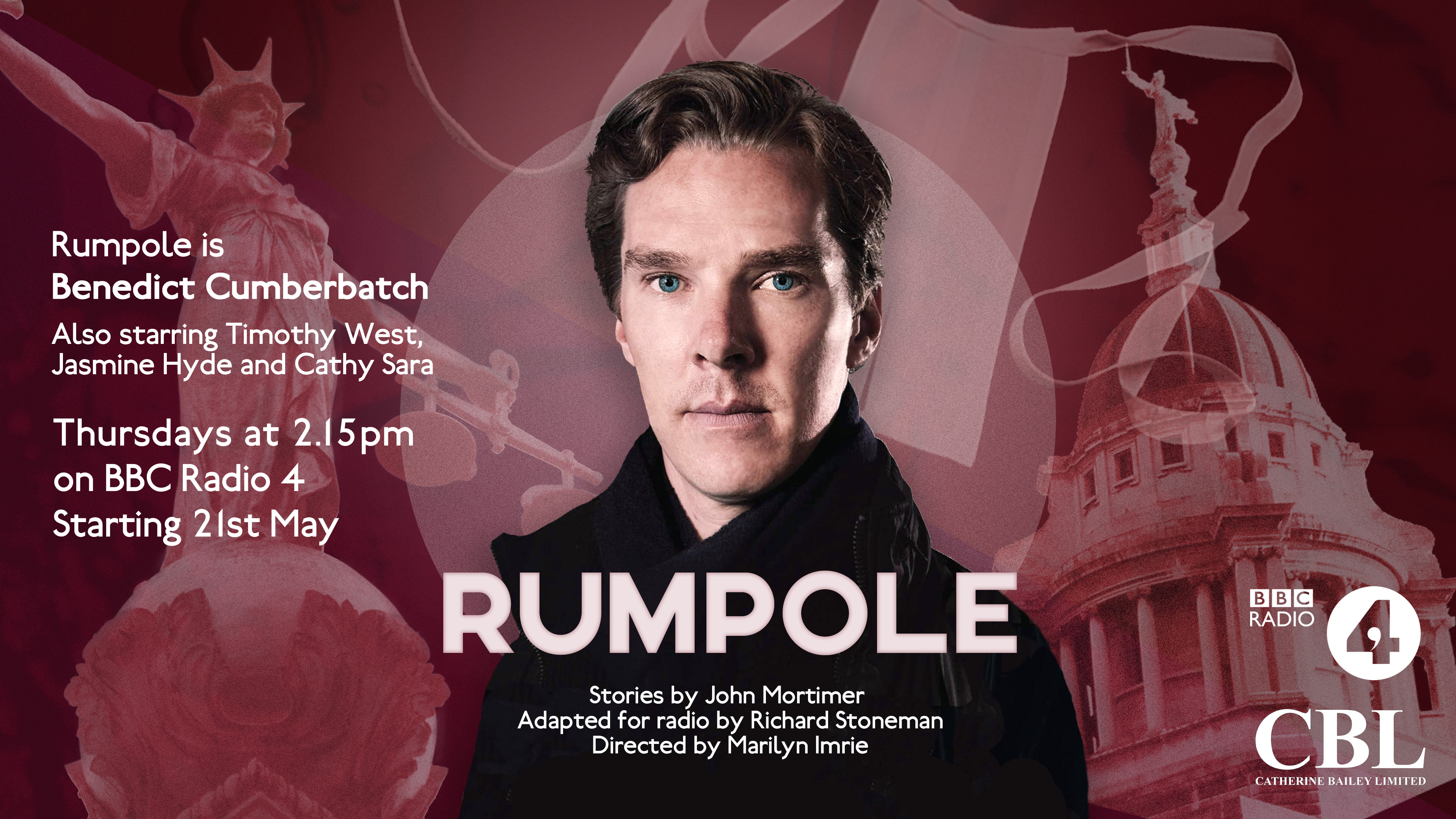 (All) by John Mortimer. Dramatized for radio by Richard Stoneman

Rumpole mingles with Yorkshire aristocracy when he represents a Lord in a Coroner’s Court.

With Timothy West and Benedict Cumberbatch.

Rumpole is seduced into defending an attractive young woman violinist accused of murder.

With Timothy West and Benedict Cumberbatch.

Rumpole’s new pupil creates trouble in a case of blackmail. With Benedict Cumberbatch

Rumpole leaves his wife Hilda, sleeps in chambers and defends a case of attempted murder

Rumpole comes close to giving up the law due to complications in both his personal and professional lives.

Rumpole defends a tabloid editor accused of libelling an author. With Benedict Cumberbatch

A man is charged with the attempted drowning of his wife. With Benedict Cumberbatch 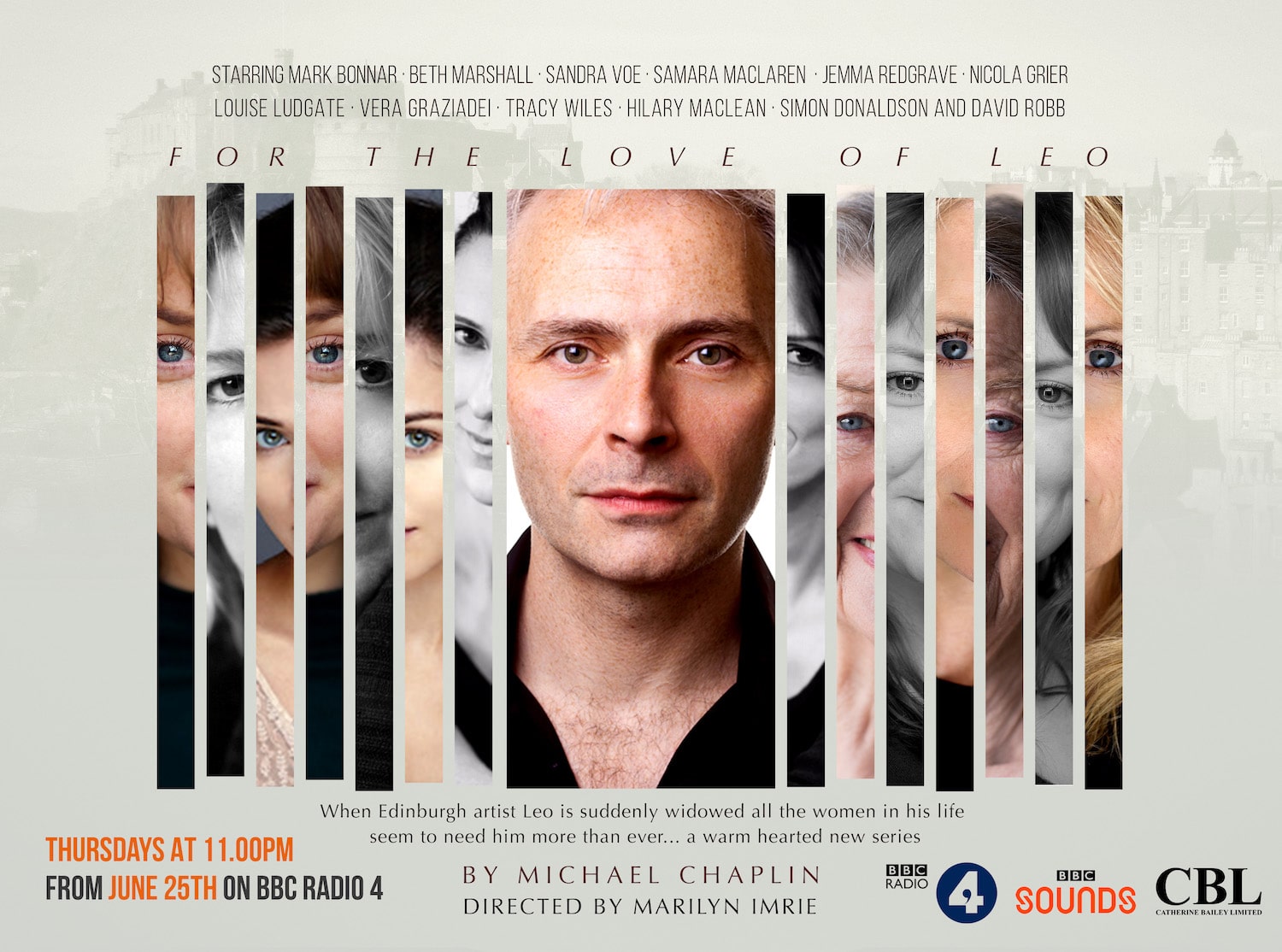 This wry, narrative comedy begins with the funeral of Tamsin, killed in a traffic accident, mother of Laura and beloved wife of Edinburgh artist Leo. The funeral is barely over before Leo acquires a new status as an eligible bachelor. The women in his circle begin to seek his company and win his affection.; while his mother, his grown up arctic weather analyst daughter and newly acquired, sparky, opinionated cleaning lady offer unasked for advice. His life becomes ever more complicated and demanding. Each episode traces his growing relationship with a different woman, as the ghost of Tamsin, who knew all of these women well, turns up at bedtime to venture an opinion too. Leo becomes increasingly haunted by the mystery surrounding Tamsin’s accident, which occurred many miles from her home. What was she doing there? Leo becomes convinced Tamsin was having an affair, but in the end the truth turns out to be very different. The series is wry, funny, sometimes sad – but always warm hearted and tender.

Me and My Shadow 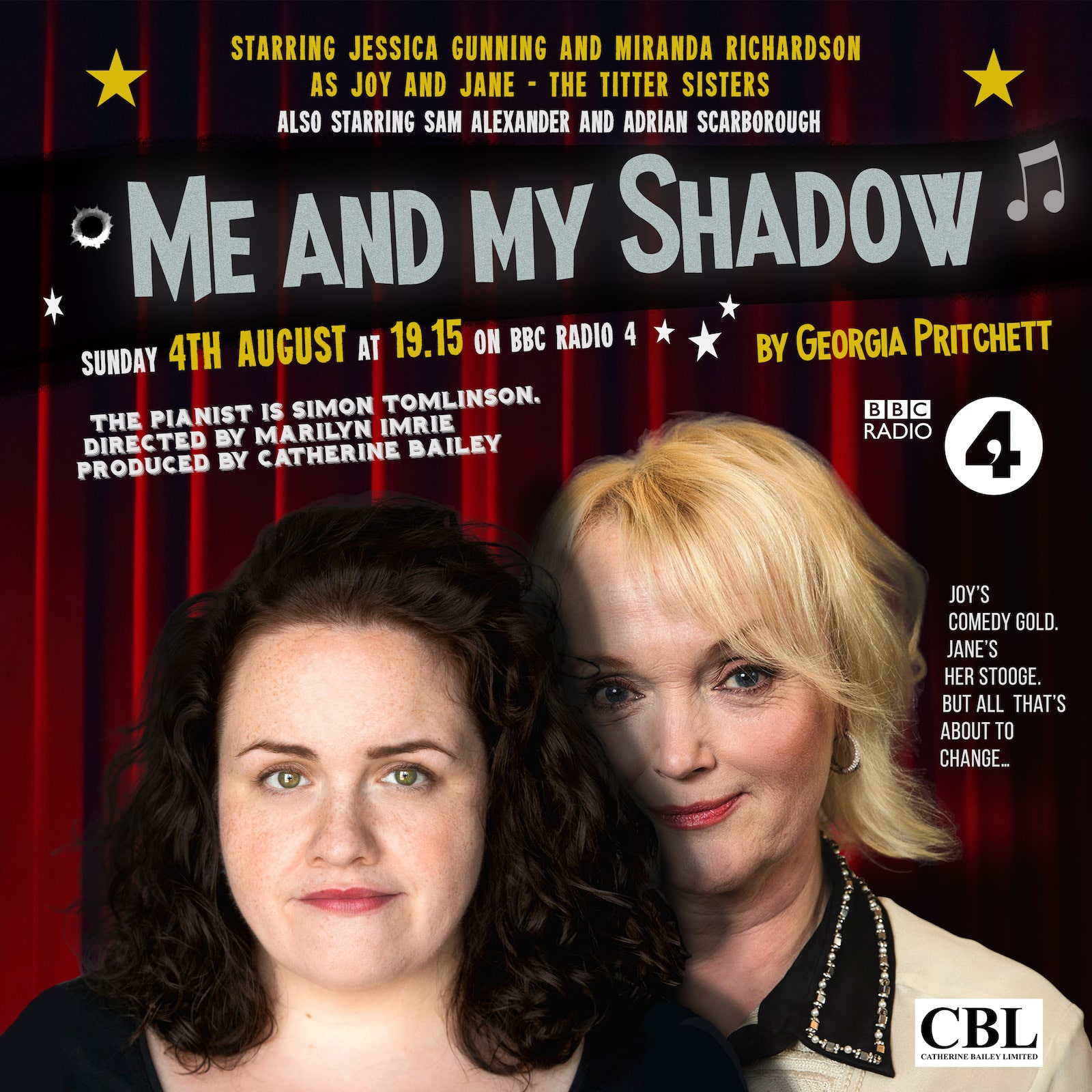 ME AND MY SHADOW

The Titter sisters are a mid-20th century comic duo playing the clubs. They can’t stand one another. A dark comedy – tantalisingly acerbic, witty and macabre, exploring the curse of being the eternal stooge.

“The dark side of showbiz comes under scrutiny in Me and My Shadow, a beautifully crafted black comedy by Georgia Pritchett [TV series Veep, Succession]. Miranda Richardson excels as ruthless joke machine and “national treasure” Joy, performing in a mid twentieth Century double act with humourless stooge Jane [Fortitude’s Jessica Gunning]. Convinced she can be funny too, Jane plots revenge on her co-star in a twisty tale reminiscent of some of BBC 2’s Inside No 9 offerings.”

“This comedy is as dark as night: Miranda Richardson and Jessica Gunning star as a comedy double act playing the Sixties club circuit. They can’t stand each other. Joy (Richardson) is a beloved comedy genius and Jane (Gunning) is her “straight man” stooge with a heartful of hate. Jane begins to plot Joy’s downfall in the most extreme of ways. The comedy chops here are excellent thanks to a script by Georgia Pritchett, one of the writers of Veep, Miranda and The Thick of It.” 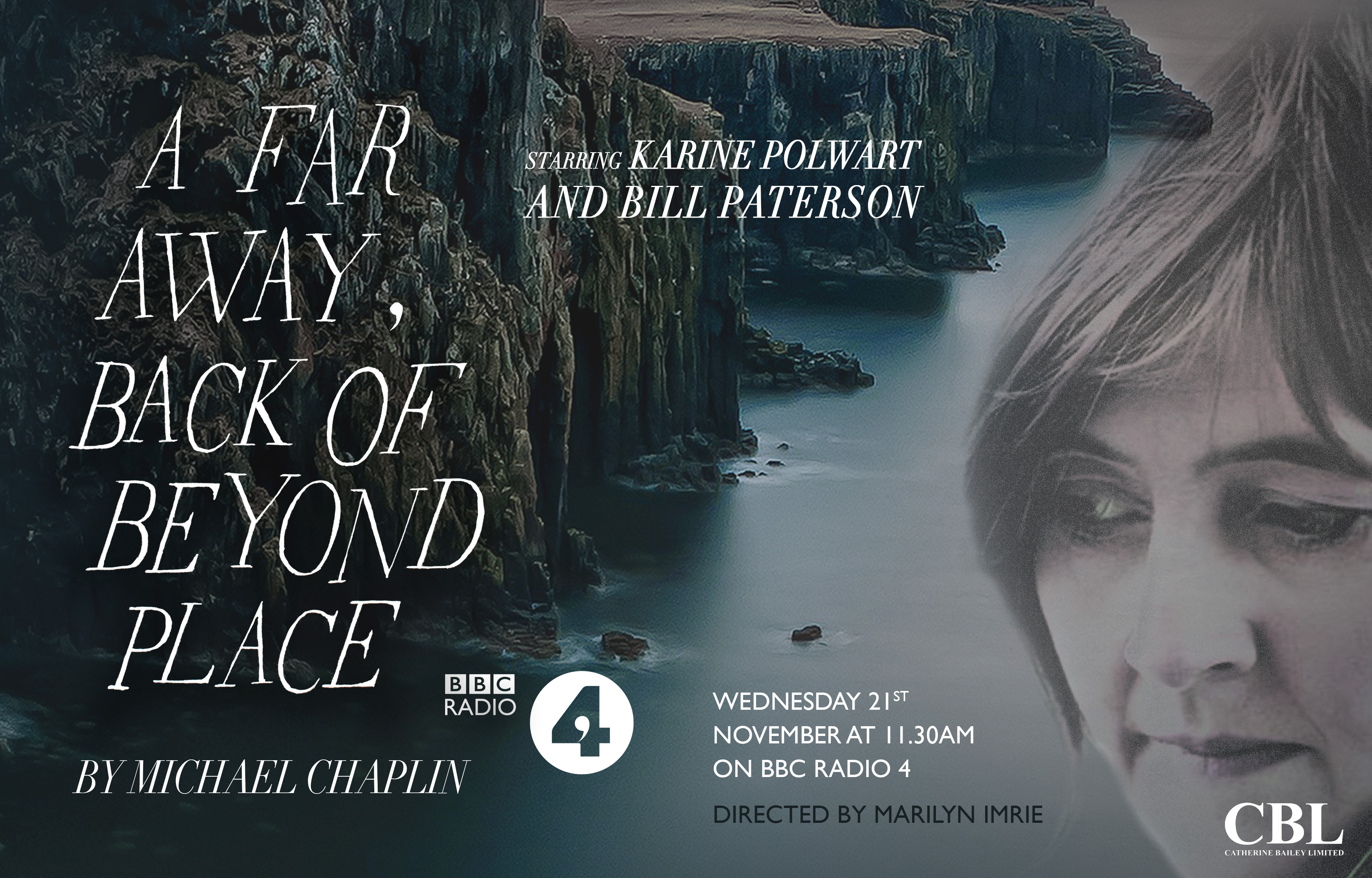 A Far Away Back of Beyond Place

A musical drama about a young musician’s quest to find the truth about her family. The drama stars much loved iconic Scots actor Bill Paterson and, in her first appearance in a radio drama, the award winning folk musician Karine Polwart.

Adapted by Adrian Mitchell and directed by Jeremy Herrin.

Starring Lenny Henry, Monica Dolan and Roger Allam (finalist in this year’s Audio Drama Awards for his role as The Governor). Our production is the poet and playwright Adrian Mitchell’s version of Nikolai Gogol’s classic satire on human vanity, with its story of a penniless nobody from Moscow who is mistaken for a government inspector by the corrupt and self-seeking officials of a small town in Tsarist Russia. 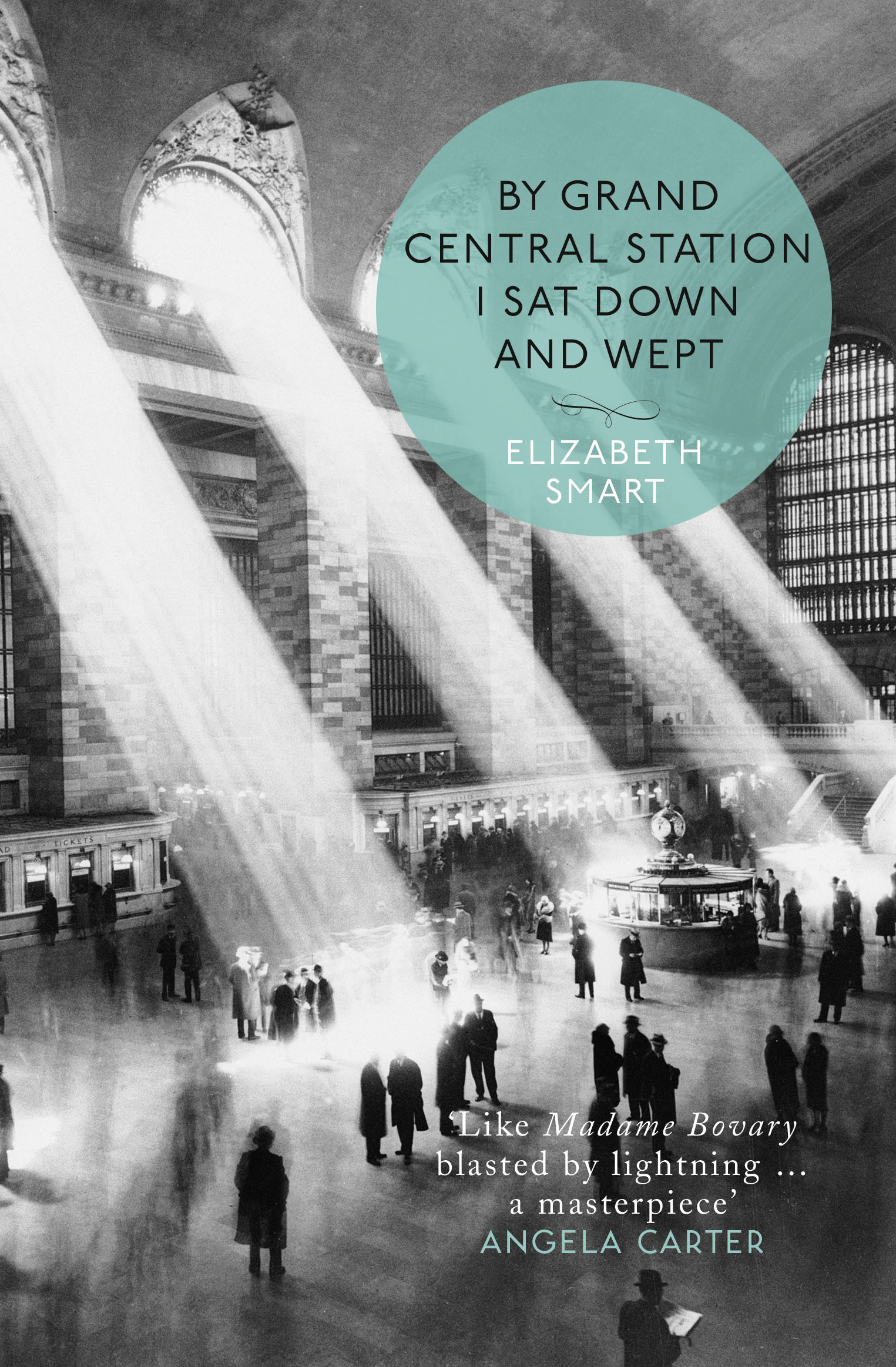 By Grand Central Station I Sat Down and Wept

Based on the book by Elizabeth Smart. Adapted for radio by Honor Borwick from the screenplay by Laura Lamson with Nancy Carroll as Elizabeth Smart and Mark Bazeley as George Barker. The story of Elizabeth Smart’s fated and intense love-affair with the poet George Barker. This adaptation for radio of the story behind Elizabeth Smart’s classic work of poetic prose combines both excerpts from her original work and biographical detail set against the background of the Second World War.
The other members of a strong cast are Claudie Blakeley, Barbara Barnes, Garrick Hagon and Jamie Thomas King. 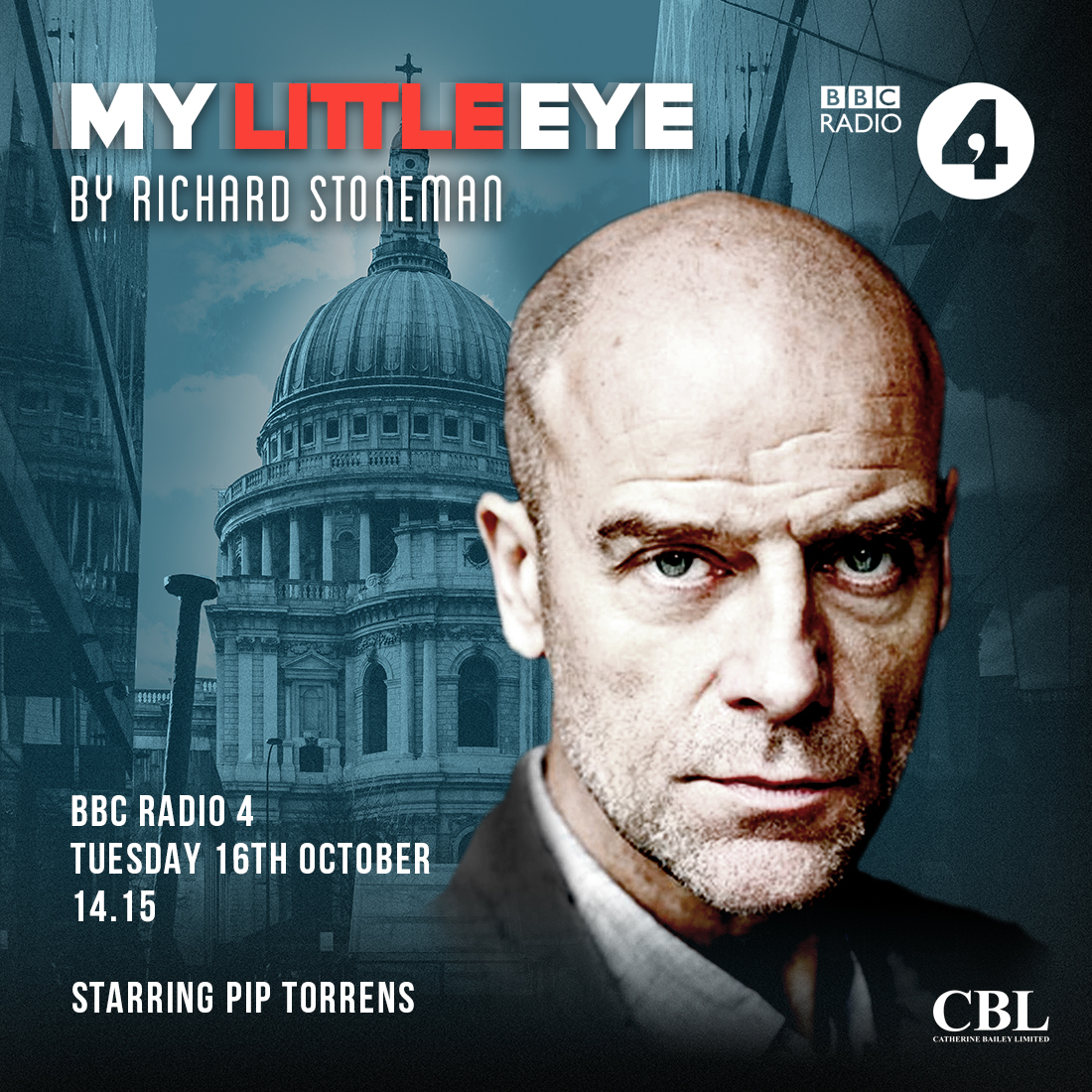 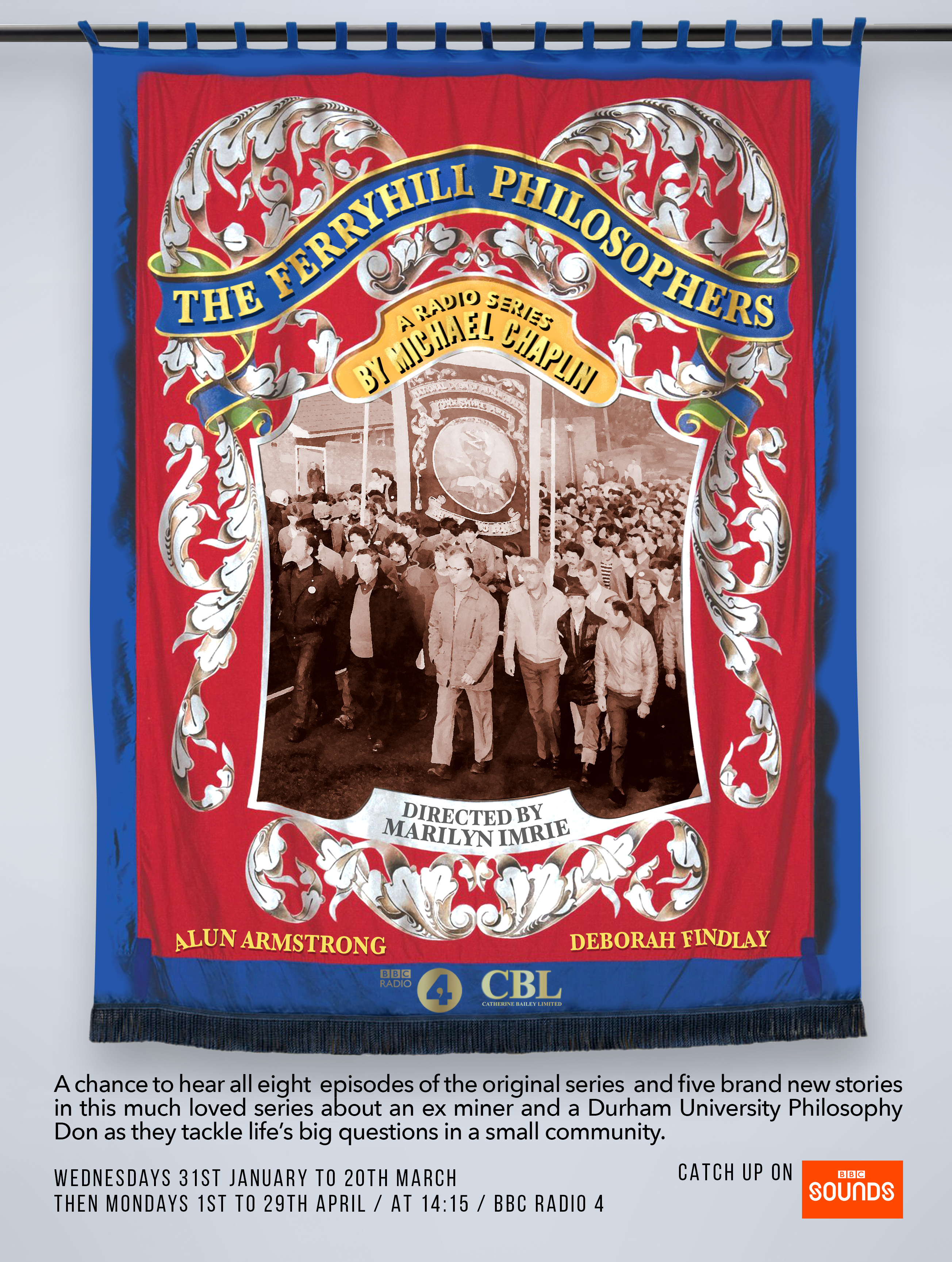 Michael Chaplin’s radio series about an ex-miner and a Durham University philosophy don. 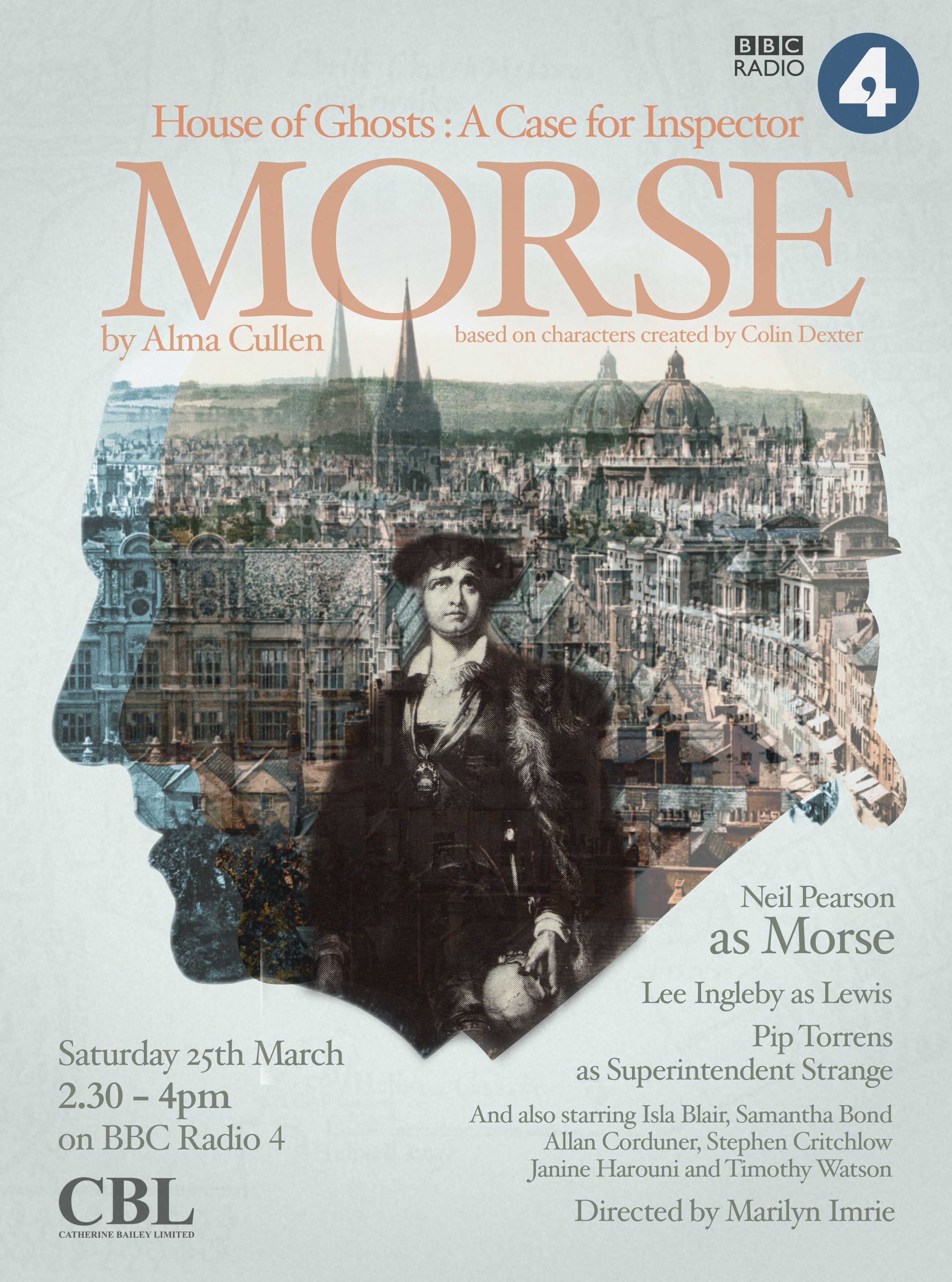 House of Ghosts: A Case for Inspector Morse

Oxford 1987. An old love and real blood and death on stage during Hamlet bring Morse dark memories and a murder to solve. By Alma Cullen and directed by Marilyn Imrie. Starring Neil Pearson as Morse. 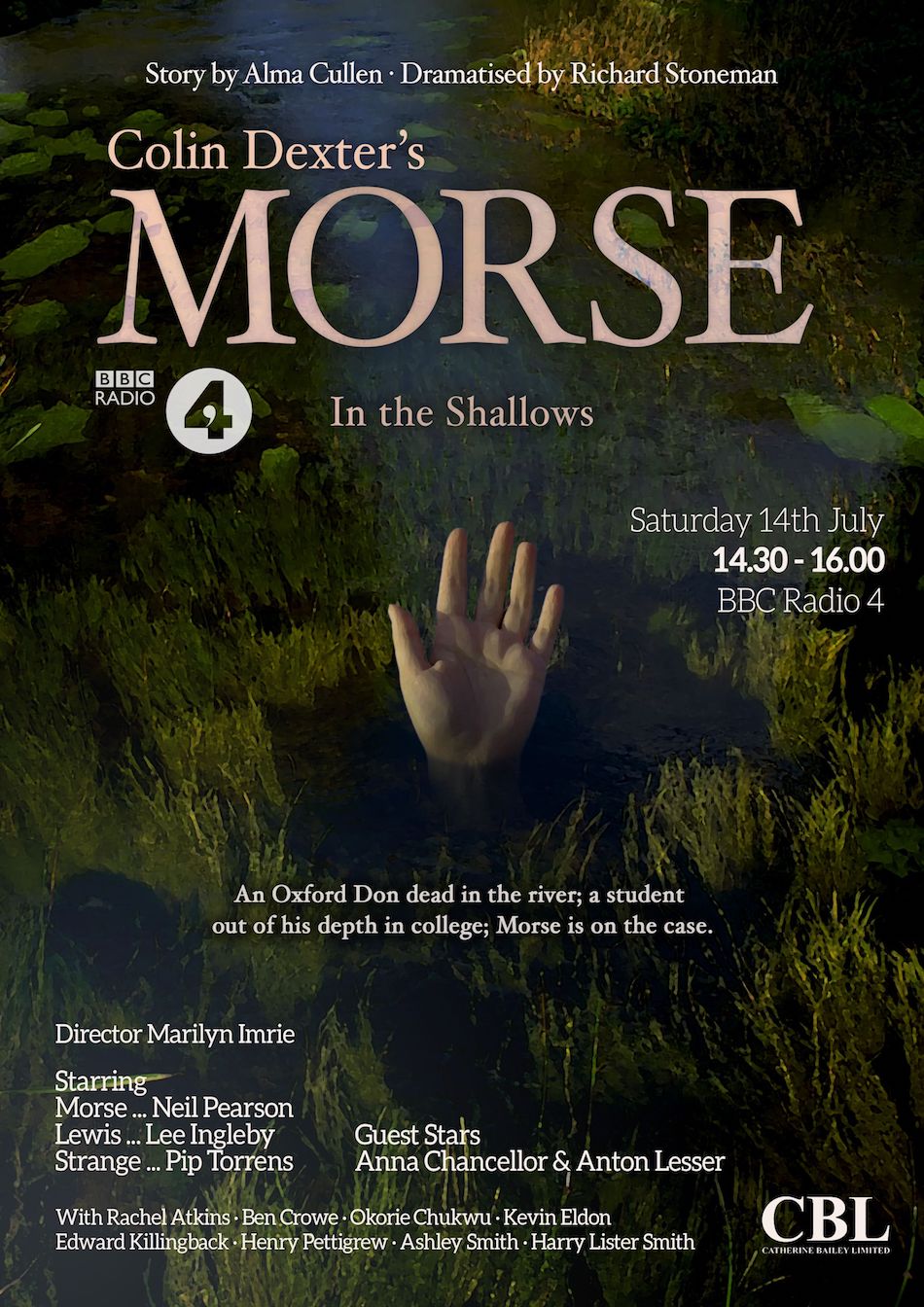 COLIN DEXTER’S MORSE: IN THE SHALLOWS

An Oxford student out of his depth, a don dead in the river, a philosopher who says she needs his help. Morse is on the case. Story devised by former Morse TV writer Alma Cullen. Dramatised by Richard Stoneman and directed by Marilyn Imrie. Starring Neil Pearson as Morse. 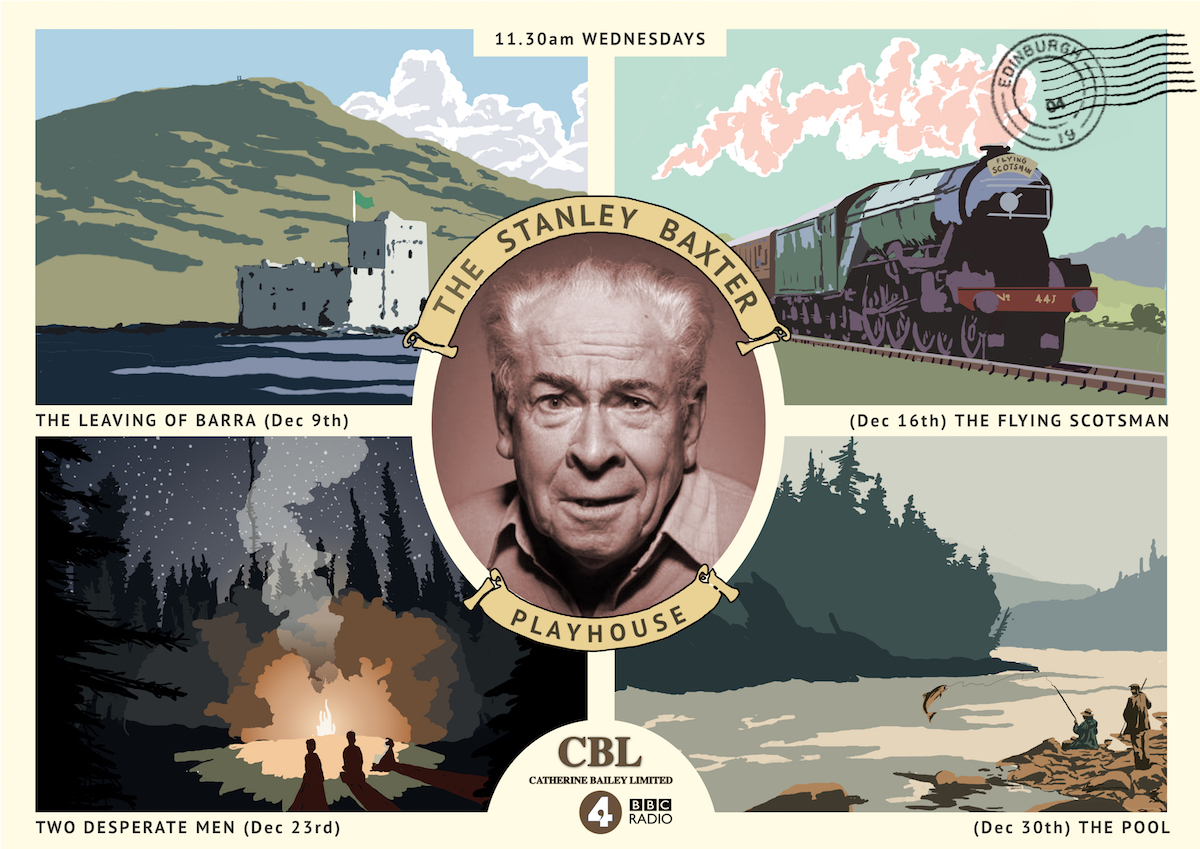 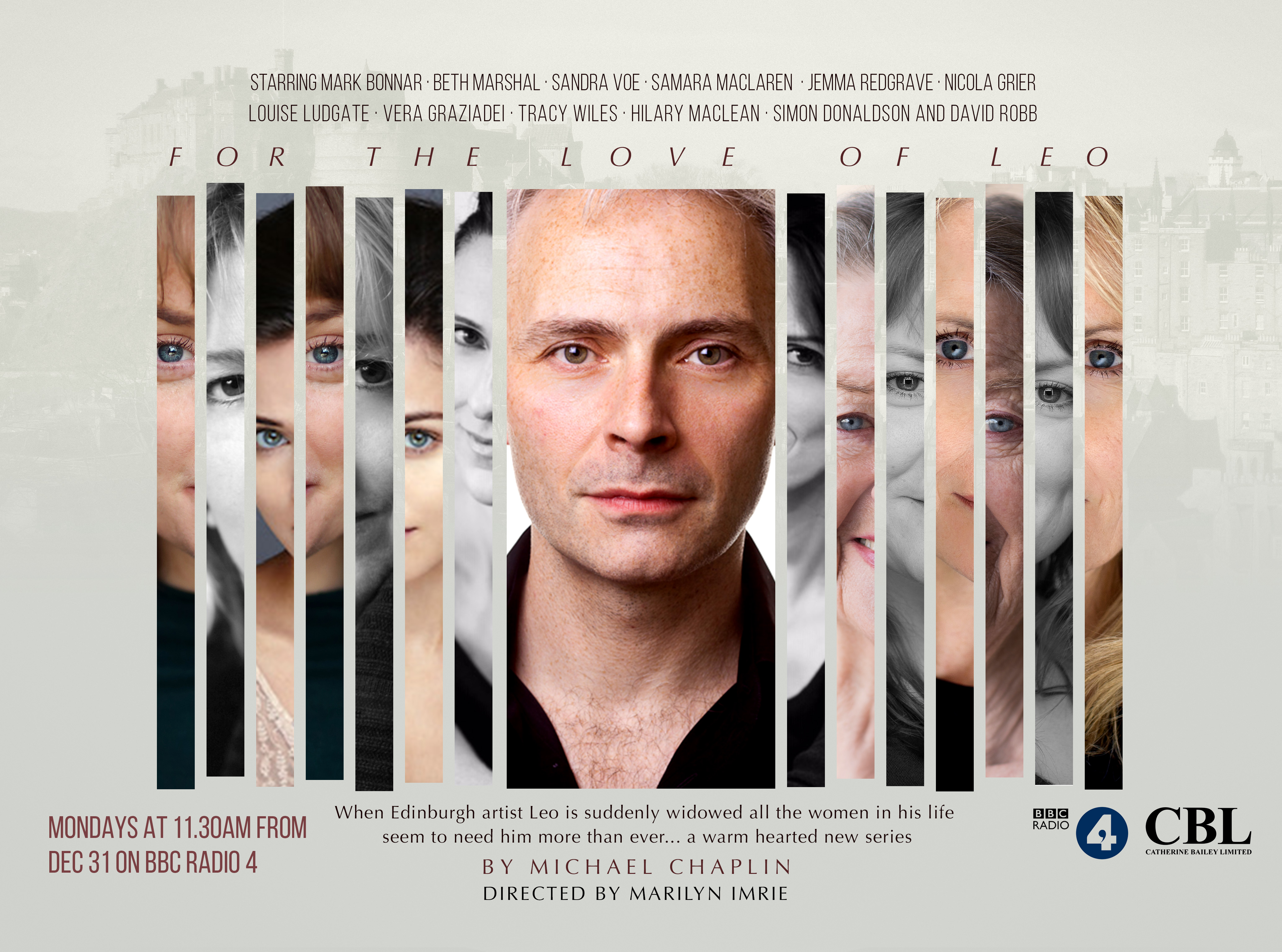 FOR THE LOVE OF LEO

When Edinburgh artist Leo is suddenly widowed, all the women in his life seem to need him more than ever.

The long-running radio programme based on John Mortimer’s much-loved Rumpole of the Bailey. Starring Benedict Cumberbatch and, later, Julian Rhind-Tutt as Rumpole. Directed by Marilyn Imrie. Adapted for radio by Richard Stoneman.

Available to buy on CD here 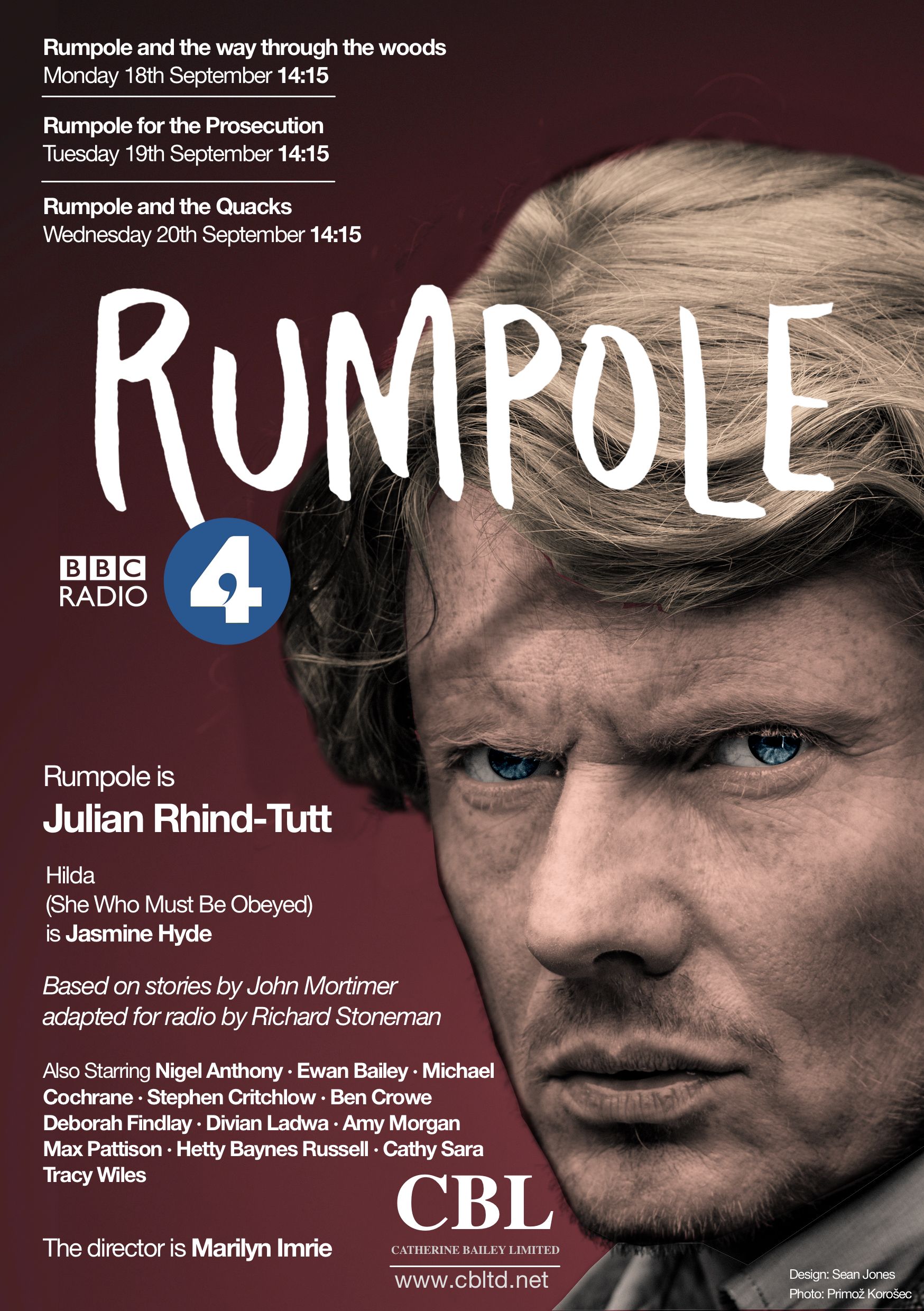 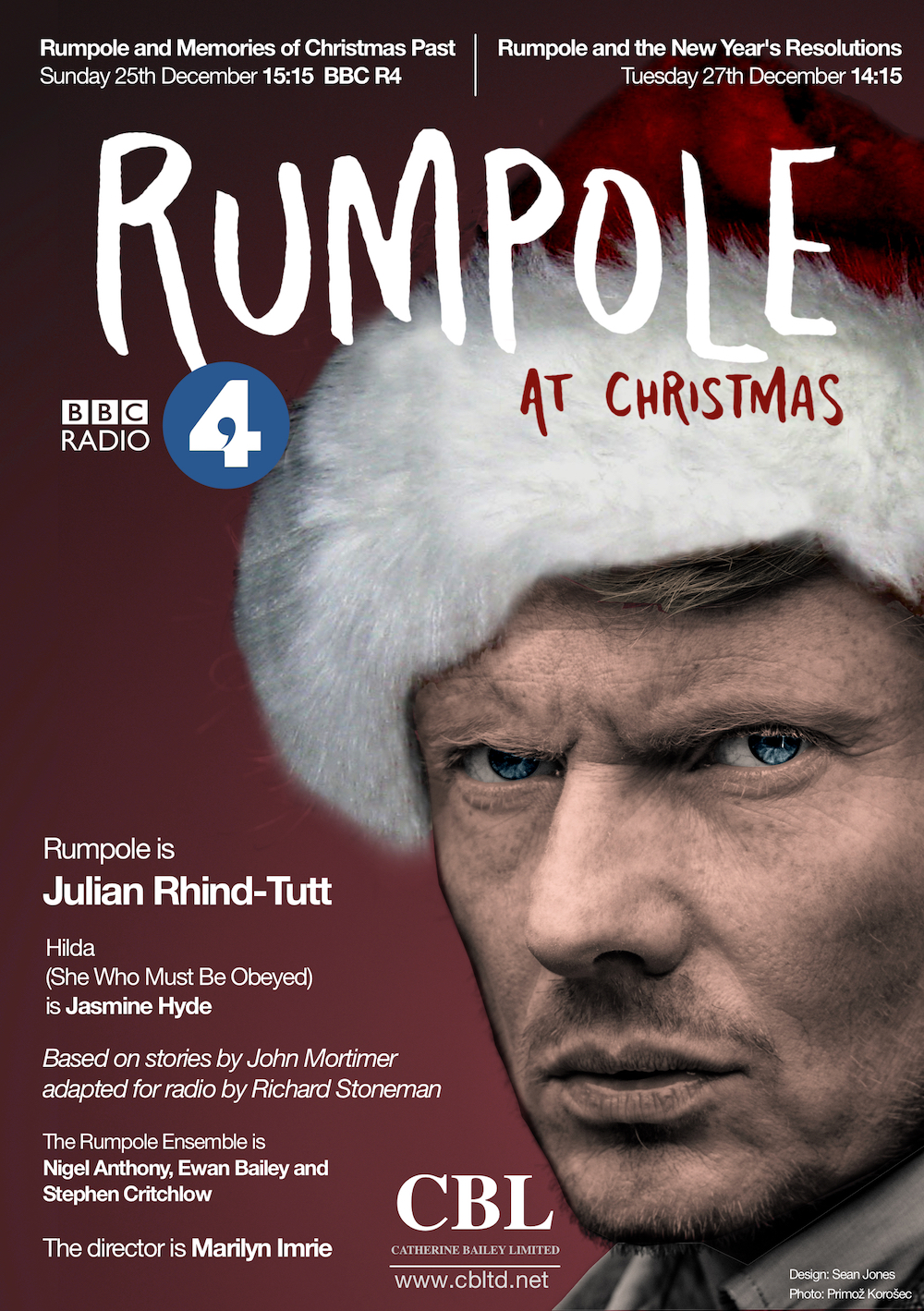 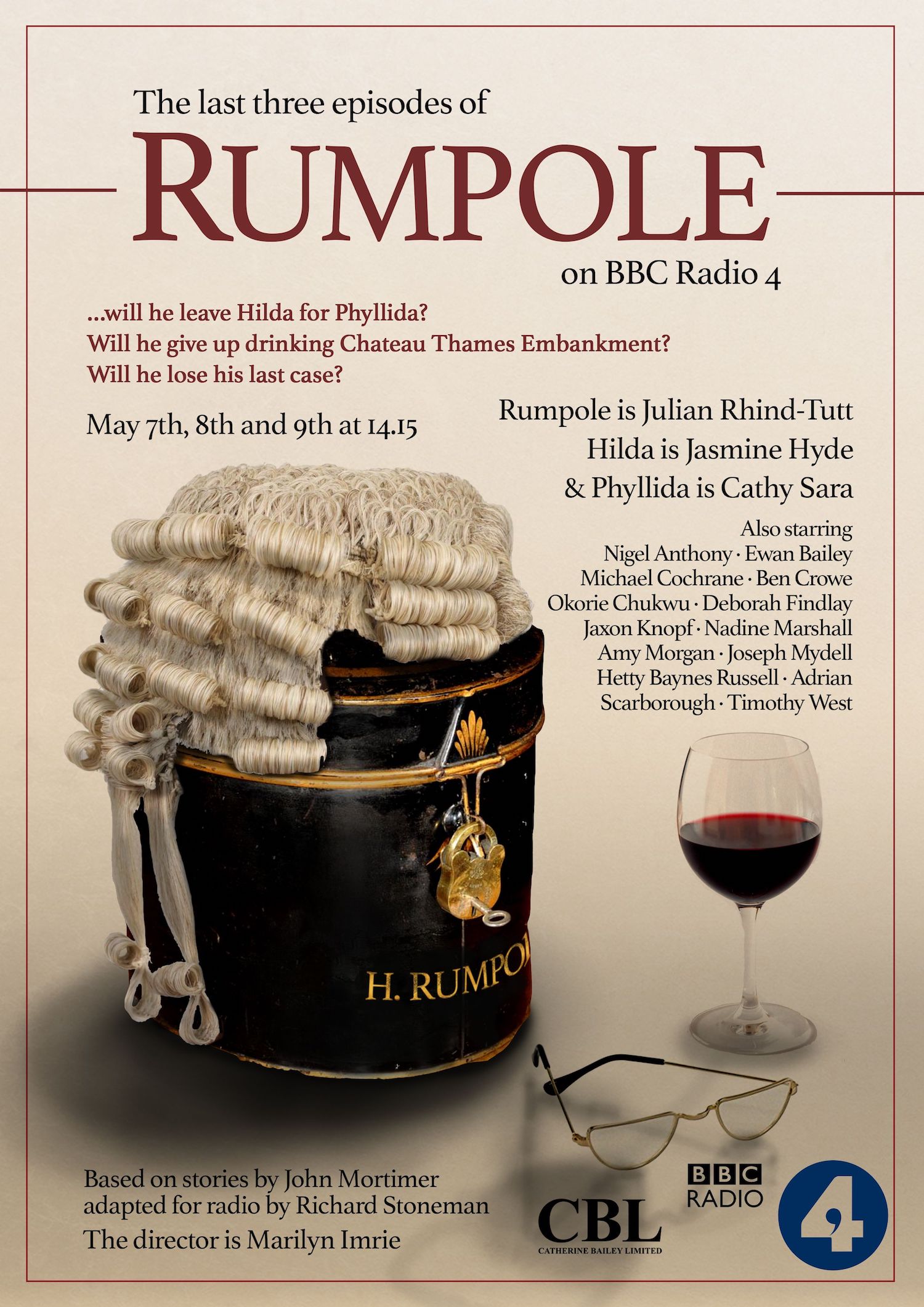 The Lady From The Sea by Henrik Ibsen on BBC Radio 3 on 3rd May 2015 With Lia Williams as Ellida and Hugh Bonneville as Dr Wangel.

Macedonia A new play by David Rudkin. Directed by Jeremy Mortimer. The story of how the playwright Euripides came to write his masterpiece, The Bacchae, in the wilds of Macedonia. Starring Michael Pennington. 15th February, 2015.

Mrs Updike by Margaret Heffernan. Directed by John Dove. Starring Eileen Atkins and Charles Edwards in a new play about the tempestuous relationship between the writer John Updike and his mother. February 2013 Radio 3.

Rumpole and the Man of God and Rumpole and the Explosive Evidence. Starring Benedict Cumberbatch, directed by Marilyn Imrie. Pick of The Week on Sunday 4th March.

The Heat of the Day Elizabeth Bowen’s wartime novel adapted from the Harold Pinter screenplay by Tristram Powell and Honor Borwick. This two-part Classic Serial for Radio 4 was directed by Tristram Powell and produced by Marilyn Imrie.
Duplicitous relationships and divided allegiances lie at the heart of this dramatisation. Stella is played by Anna Chancellor, is an intelligent widowed woman, living in London during the Second World War and working for a government agency.

Boniface and Me / Gracey and Me – November 2010
Gracey and Me is the sequel to the very popular ‘Boniface and Me’ both written by Gillian Plowman. Starring Harriet Walter, Jenny Jules, Henry Goodman, Lauren Mote, Lakechia Jeanne, Hannah Boyde and Denton Chikura. Directed by Annie Castledine.

Rumpole and the FamilyPride. Rumpole mingles with a branch of Yorkshire aristocracy remotely connected to Hilda when he represents a Lord in the Coroner’s court. 9th August 2010 (2 parts) – Radio 4.

Rumpole and the Eternal Triangle. We rejoin Rumpole and Hilda in the late 1950s. Rumpole is seduced into defending an attractive woman violinist accused of murder. 10th August 2010 at 2.15pm – Radio 4.

CLARISSA by Samuel Richardson
Adapted in four parts for the Radio 4 Classic Serial by Hattie Naylor.
14th, 21st, 28th March and 4th April 2010 at 3pm – Radio 4.
Clarissa is a heartbreaking, compulsive piece of epistolary storytelling in a new dramatisation of one of the world’s greatest novels. Published in 1747, it was the precursor to and inspiration of many of the great European novels which followed in its wake. Cast:
* Robert Lovelace played by Richard Armitage
* Clarissa Harlowe played by Zoe Waites
* The company: Alison Steadman, Deborah Findlay, Miriam Margolyes, Oliver Milburn, John Rowe, Julian Rhind-Tutt, Adrian Scarborough, Stephen Critchlow, Cathy Sara, Sophie Thompson, Ellie Beaven, Lisa Hammond and Linda Broughton.

The Song Thief by Michael Chaplin.

Rumpole and the Reign of Terror by John Mortimer with Timothy West and Prunella Scales. Directed by Marilyn Imrie.

Wheeling Them In by Rona Munro.

Boniface and Me by Gillian Plowman. Directed by Annie Castledine with Harriet Walter and Jude Akuwudike.

Flying Down to Greenock by Michael Chaplin.

The Vertical Hour by David Hare. Directed by Jeremy Herrin with Anton Lesser and Indira Varma.

The Antisocial Behaviour of Horace Rumpole by John Mortimer. Directed by Marilyn Imrie with Timothy West and Prunella Scales.

A Streetcar Named Revenge & The Trusty Valet and the Crusty Butler with Stanley Baxter and Richard Briers.

A DISAPPEARING NUMBER
Winner for Best New Play of the 2007 Critics Circle Award, The Evening Standard Award and Olivier Award Disappearing Number was conceived and Directed by Simon McBurney with Original Music by Nitin Sawhney. A Disappearing Number is a provocative meditation on the beauty of mathematics and the nature of creativity, inspired by the true story of the collaboration between two of the 20th century’s most remarkable pure mathematicians, Srinivasa Ramanujan, a poor Brahmin from South India and Cambridge Professor GH Hardy. Sound Design is by Christopher Shutt. A Disappearing Number was a co-production with Complicite. Directed by Simon McBurney with Saskia Reeves.

Woman’s Hour Serial: To The North by Elizabeth Bowen. Dramatised and directed by Deborah Paige with Margaret Tyzack and Catherine McCormack.

Radio 4 – The Stanley Baxter Playhouse: The Man in the Garden by Rona Munro. Directed by Marilyn Imrie.

Have You Come Far? And The Man in the Garden by Rona Munro.

QUARTERMAINE’S TERMS by the late great British playwright Simon Gray. Directed by Maria Aitken
Michael Palin stars as St John Quartermaine, a teacher whose life lived vicariously in the confines of a staffroom is dwindling away.
‘Quartermaine’s Terms’ is a funny and moving play set in a school for teaching English to foreigners in the 1960s. It deals with the concerns of seven teachers over several years and in particular the progress of Quartermaine, a lonely man and ineffective teacher.

The Airman Who Would Not Die by Michael Crompton directed by John Dove with David Tennant and Miranda Richardson.

The Importance of Being Earnest by Oscar Wilde directed by Howard Davies with Simon Russell Beale, Celia Imrie, Geraldine McEwan and Geoffrey Palmer.

The Story of Tracey Beaker and The Dare Game by Jacqueline Wilson dramatised by Amanda Swift and Georgia Pritchett. Directed by Marilyn Imrie.

The Vertical Hour by David Hare, directed by Jeremy Herrin.

Machinal is a 1928 play by American playwright and journalist Sophie Treadwell, inspired by the real-life case of convicted and executed murderer Ruth Snyder. Starring Fiona Shaw.